On March first the initiator and owner of the GLdH-database project and this website, Nizaar Makdoembaks, has published a new study on Seventeenth century Suriname entitled ‘Homovervolging in tijden van slavernij Christelijke mensenoffers onder auspiciën van de Amsterdamse Sociëteit van Suriname‘ which freely translates as ‘The persecution of gays in times of slavery – Christian human sacrifices under the auspices of the Amsterdam Society of Suriname’. 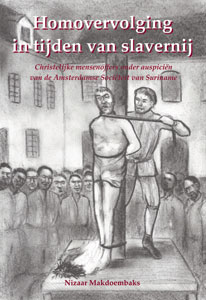 In the Netherlands and Suriname several waves of severe persecution of gays occurred during the eighteenth century. Especially the first wave in the early thirties knew barbaric punishments which were in fact human sacrifices. In the Netherlands people feared a wood-eating worm which threatened ships and harbours and was framed as a punishment from God for the presence of sodomy. In Suriname economic misfortune and being overpowered by maroons (runaway enslaved) were the projected divine punishments for the presence of sodomites in the colony. It was not a coincidence that the persecution of gays paralleled a heavy increase in the ongoing persecution of maroons.

In colonial Suriname immorality and the pursuit of profit ruled society. The persecution of gays there has been studied very little. Between 1731 and 1778 21 men were arrested, seven of whom were sentenced to death, usually by slow strangulation and simultaneous blackening. Four were banished and the rest got off or received a less severe punishment. The Christian judicial motive for the persecution was copied from the Dutch Republic. The research into the fate of these men however shows that the persecution of gays in Suriname was not but e mere extension of what was going on in the Netherlands.

Makdoembaks reconstructs the trials and places them in their specific context of colonial Suriname. He does so by looking at, for instance, the maroon attacks on plantations owned by high ranking colonial civil servants and the cause of death of Rosina Berwig-Neisser, a Moravian pioneer in Suriname at the time. In a wider sense Makdoembaks shows how double standards perpetrated every corner of society, under the influence of slavery. More than in the Republic gay men became the ideal scapegoats in Suriname. Their persecution served but one purpose: to preserve, in every aspect, the immorality of life based on slavery.

The book is for sale in online bookstores such as this one and this one (only available in Dutch).

Wij gebruiken cookies om ervoor te zorgen dat we u de beste ervaring op onze website bieden. Als u doorgaat met het gebruik van deze site, gaan we ervan uit dat u hiermee tevreden bent.This website uses cookies to ensure you get the best experience on our website. By continuing to use this website, you consent to the use of cookies.AccepterenLees meer